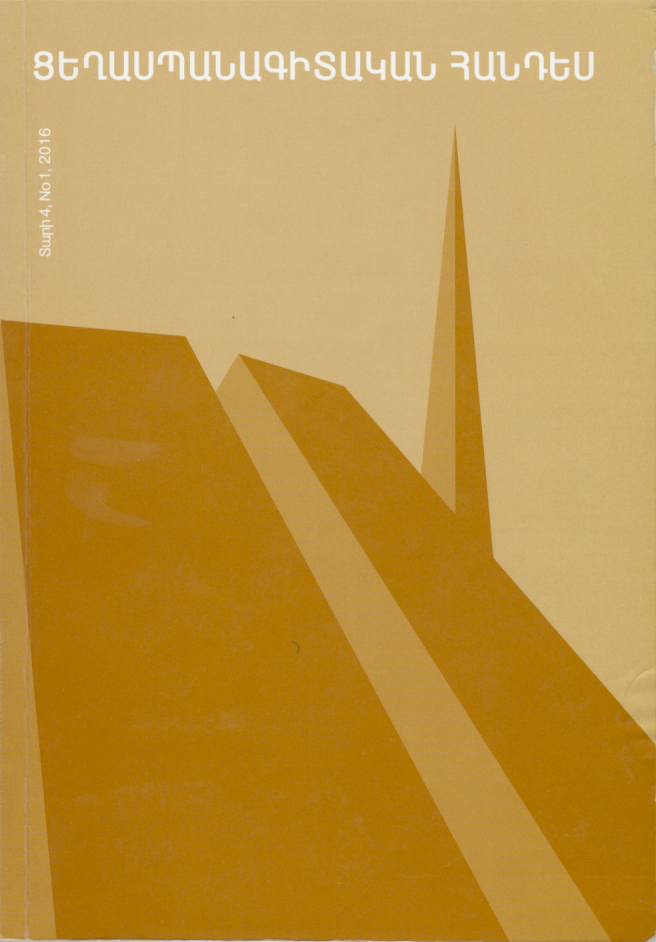 Armenians Between the Two Empires: Caucasian Front of the Russo-Turkish War of 1877-1878 in Ottoman War Propaganda

Summary
The Young Turks government carried out a policy of turkification of the Armenian children also on the state level led by the official orders and telegrams. Turkish orphanages were opened in Aleppo, Antura, Beirut, Damascus, Merdin, Armash, Urfa, Diyarbakir, Malatya, Kharberd, Caesarea, and in other settlements. After collecting the Armenian children in the orphanages, a state orchestrated Turkification policy was carried out by different means, namely, it was strictly prohibited to communicate in the native language, children were given Turkish names and circumcised, they had lessons in Islam and Quran, implanted with Turkish nationalistic ideas. This article analyses turkification policy in orphanages also by presenting some new details on the methods used. Unpublished memoirs are put into circulation.

Abstract
After World War One questions related to ethno-demographic composition of Western Armenia’s population together with the issues of compensation for losses suffered by the Armenian people as a result of the genocide and definition of the future borders of independent Armenia were put on the agenda of the Paris Peace Conference in the context of preparation of peace treaty with the defeated Ottoman Empire. Various Armenian official and unofficial organizations, as well as Turkish authorities and Allies addressed these questions.
Comparison and analysis of the Armenian, Ottoman and British-US statistics on Western Armenia (“six vilayets,” Trebizond, Cilicia) presented at the Paris Peace Conference demonstrates that US and British experts and diplomats relied mainly on the Armenian sources and calculations of the number of Western Armenians in defining ethno-demographic composition of Western Armenia’s population in the framework of the post-war settlement. US and British experts and diplomats didn’t use the Ottoman statistics in determining the size of the Western Armenian population.

Abstract
This article presents the efforts of the Armenian National Relief (ANR) organization to reclaim Armenian orphans in the Ottoman Empire after WWI. The two main directions of the organization’s activity are studies: liberation of the Armenian children and women from Muslim households and institutions and reclaimation of the orphans from abandoned places and their distribution in ANR’s orphanages.
Due to ANR efforts, thousands of Armenian orphans and refugees were rescued from starvation and annihilation.

Abstract
The article demonstrates that the appearance of the Armenian Genocide topic on the agenda of the Turkish press and Turkey’s sociopolitical and scientific-analytical circles, as well as its further development is greatly connected with “Agos”, and mainly with the publications of Armenian and foreign authors’ in the weekly. However, part of the publications on the Armenian Genocide was unacceptable for the Armenians. However, the views of Hrant Dink (mainly left handed) were based on the Turkish reality and intended not so much to speak on the deep essence of the issue, but create opportunities in Turkey for the furtherance of discussion of the matter. On the other hand, some Turkish and foreign authors were overtly or covertly from the ranks of the “official intelligentsia”, therefore they pursued the aim of advancing the Turkish official viewpoint, sometimes hiding it under “Armenophil” manifestations.

Abstract
The characteristic feature of mythmaking inclinations of Turkish political elite is the national myths creation for the evaluative mass orientations, the confirmation of state ideology and policy. The core of this process is the mythmaking around the Armenian Genocide creating the ethnographic myths aimed at providing the fluffy image of Turkey within countries and in the international arena. The essence of the informational-psychological war is the fa-lsified history of ethnic superiority which must meet modern requirements and the justification for refusal of full recognition of the Armenian Golgotha.
The service of official ideology is implemented by professional historians, counselors and expert historians who together with the political elite must take responsibility for the consequences. The ethnopolitical myth-makers know the real lowdown history of the Armenian Genocide, but seek to preserve propaganda stuffing created by the Young Turks. The basis of the mythmaking is the preservation of the ethnopolitical confrontation. The danger of the historical situation is that in course of time any lie can become true.
In 2014 and early 2015 the mythmaking of Turkey around the Armenian Genocide was enriched by a succession of myths: «general pain», historical justice, political correctness and phobias. From the standpoint of deviation the problem of achievement of the Armenian Genocide satisfaction was solved in order to justify the rejection of restitution. All the myths are a synthesis of the truth and mimicry of the truth on the Armenian Genocide. The reason is the deviant behavior of Turkey, having realized that the policy of partial satisfaction doesn’t work, went back to the well-tried way – the policy of denying the Armenian Genocide so as to avoid restitution. Volatile trends function: the partial recognition and the denial of the Armenian Genocide.

The Young Turks’ Ideological Guidelines: Religion in Politics and Politics in Religion

Abstract
The article presents the Young Turks’ attempts to adopt European philosophy and Turkish old and new doctrines as a result thereof a new syncretic ideology was formed. The latter ideology called ittihadism was a synthesis of Pan-Turkism, positivism and modernism. Special attention is put on the Young Turks’ religious policy which was directed against the Christians of the Ottoman Empire, especially – the Armenians.

Abstract
During XV-XVI centuries and even later the Turks didn’t yet form an ethnonym, national self-consciousness. Theoretical ideas of the Turkish nation – united community, homeland, and making sacrifices for the sake of the homeland – existed only among the Turkish elite. After the defeats in the Tripolitanian (1911-1912) and Balkan wars (1912-1913) official policy of Ottomanism failed and Turkish nationalism came on the political agenda. Intellectual circles started research to reveal history of the origins of the Turkish nation, its unique cultural features, ideas of fatherland and patriotism. Not finding such notions, they started to work towards the creation and later propagation of such ideas among the society, which was resulted also in practical steps to establish a “homeland” for the Turkish nation.
The aim of this article is to present the abovementioned developments in the Empire.

“Cultural” Roots of Mass Participation During the Armenian Genocide

Abstract
Millions of people were in different ways involved in the process of extermination of Armenians by organizing, supporting and carrying out a “project” of annihilation during the Armenian genocide. The readiness of Turkish population to participate in the implementation of genocide and their involvement in the killing process didn’t crop up suddenly. It was based on an age-long history of negative and even rancorous predisposition and ingrained stereotypes of the certain social perception. These prejudices existing in the society, which can also be called “cultural roots”, were crucial as they became the basis to create “the temple of hatred” for a large-scale anti-Armenian propaganda campaign.
Three “historical” perceptions of Armenians as outsiders dominated in the Muslims’ mindset for a long time -Armenians as infidels, as subordinates, and potential victims. These three views sometimes acted as separate phenomena, but often were intertwined in the form of a complex attitude towards the Armenian population of the empire.

Abstract
The article presents an original secret document, a report, sent from Aleppo to Cairo on August 3 (16), 1915. It contains information about destruction of the Armenian population deported from Western Armenia and Cilicia, violence against deported Armenians on the way, as well as situation of deported Armenians in Aleppo and adjacent Syrian deserts.
The document has a brief foreword and extended notes.

Armenian Question, Massacres of 1890s and the 1909 Adana Massacres in "Turkish Massacre of Armenians - Book-Length Manuscript" of Raphael Lemkin

Abstract
The article examined the observations of Raphael Lemkin in “Turkish Massacre of Armenians – Book-Length Manuscript” about the arise of Armenian Question, massacres of 1890 and the 1909 Adana massacres. Lemkin using multiple sources, describes the features of its perception of Armenian history, the origin of Armenian Question, the acts of genocide against Armenians by the Ottoman authorities. Lemkin’s manuscript shows the indirect complicity of the great powers of the Ottoman Empire in the late 19th century massacres of Armenians as massacres that were taking place with their permission. Lemkin views the Adana massacres as an important signal for the organization of the forthcoming deportations and massacres.