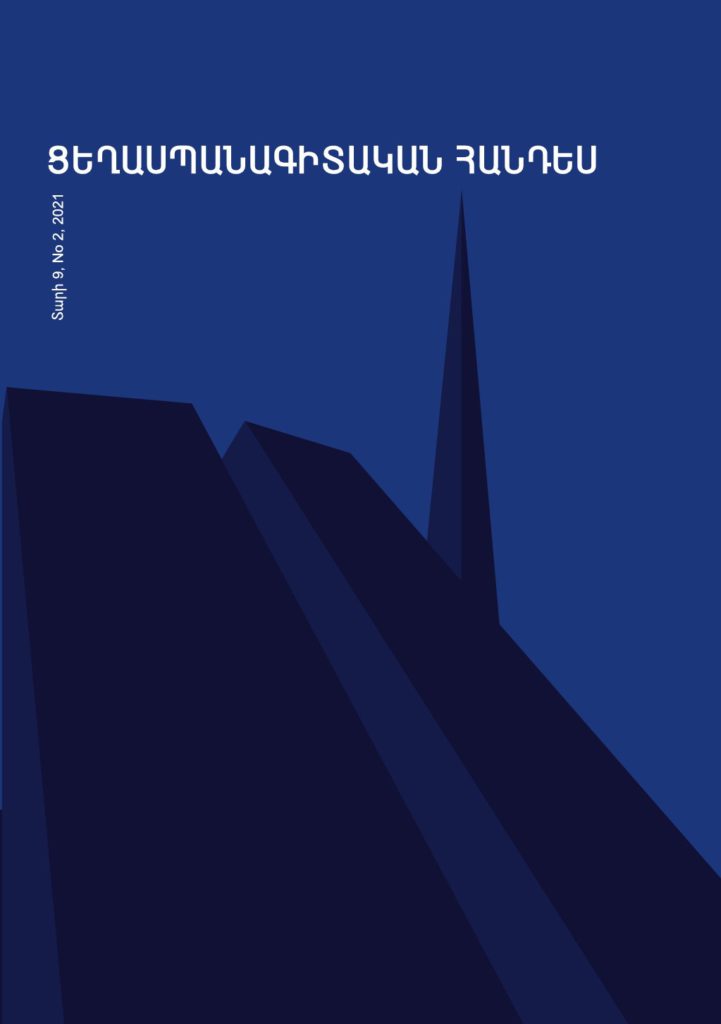 Summary
The Pan-Armenian Declaration, adopted on January 29, 2015 at the meeting of the State Commission on Coordination of the events for the commemoration of the 100th anniversary of the Armenian Genocide, notes that it “considers the 100th anniversary of the Armenian Genocide an important milestone on the ongoing struggle for historical justice under the motto “I remember and I demand.”” Thus, it was proposed to consider this motto as a short formulation of the policy of memory of Armenians. This raises questions related to the components of this motto and requiring clarification in the context of conveying the memory of the Genocide in the 21st century: Who do I remember? What do I remember? How do I remember? What do I demand? From whom do I demand? How do I demand?
The article proposes and justifies the answers to these questions. In particular, on the first issue, it is proposed to compile an electronic database of victims and survivors of the Genocide, their memories, video and audio recordings. The necessity of reformulating the name of the day of commemoration of the victims of the Genocide is substantiated. Answering the question “what do I remember?,” it is proposed to remember also the self-defense battles during the Genocide; the humanitarian assistance of Armenian and foreign benefactors; humanitarian resistance to the perpetrators of the genocide; mutual assistance of family members, relatives, friends; moral victories; the struggle to stay alive. In answer to the question “how do I remember?” talks about the problems of mourning and worthy memory; commemorative processions; the construction of monuments (khachkars); the introduction of the “Park of Memory” culture; forms of using the memory of the Genocide as a means of strengthening the Armenian Diaspora communities; the need to organize exhibitions; highlighting specific people and organizations from the collective image of the victims of the Genocide processions with their portraits; creation of methods of teaching genocide and other problems.
In connection with the question “what do I demand?” talks about various manifestations of Armenian demands (land, financial, moral), the question of the need to form a state approach to the problem is raised. Touching upon the question “from whom do I demand?,” the views prevailing in the society (from the world, from Turkey, from the Armenians, etc.) are considered. When discussing the question “how do I demand?” we are talking about the creation of such structures, similar to which were formed in due time to solve analogous problems and successfully passed the exam for decades, and have an experience, knowledge of which will also be useful for Armenians (for example, the “Conference on Jewish material claims against Germany”).

On the Academic Classifications of Genocides

Summary
Discussion continues over the subject of genocide, the boundaries of the crime, as genocide scholars debate its key concept, the term genocide. Some of them have contributed their own definitions of the phenomenon, which cannot have legal force. Disputes continue over whether the massacres can be considered genocide or not. It can be summed up that most scholars are in the middle ground between the two farthest approaches (if some argue for the uniqueness of the Holocaust, then the other camp offers a broad, almost universal inclusion of mass murder cases under the definition of genocide). There is almost complete consensus on the four major genocides: the Armenian Genocide, the Holocaust, the Cambodian Genocide, and the Rwandan Genocide. But many more other cases are the subject of academic and often political debate.
To clarify this debate, comparative genocide studies and the classification of genocides can be helpful. The classification of Vahakn Dadrian is essential for us. He divided genocidal cases into four groups: Cultural, Latent, Retributive, Utilitarian and Optimal genocide, based on the outcome of the genocide.
In parallel with this process, several terms continue to be used that do not correspond with genocide, but help explain related issues: politicide, gendercide, eliticide. However, we should remember that genocide is a legal term; the others are not.

Summary
Gevorg Halajyan’s (Taparakan) diary-memoir was published in the USA yet in 1932, but it has not been decently studied and systematized. This extensive work is an invaluable source about the Turkification and assimilation of Armenians in several provinces of Western Armenia in 1924-1928. To stand before the Independence Tribunal of Kemalist Turkey, Halajyan had to travel to Adana, Diyarbakir, Kharberd, Malatya, to be eventually imprisoned in the jail of Sebastia. Halajyan wrote down whatever he eye-witnessed and heard of about the conversion and assimilation of the Armenians in the provinces. Later he escaped from prison to Bulgaria and then to America.
This article analyzes the data Halajyan left about Turkified Armenians, as well as discusses the issue of desacralization of churches and chapels during the Armenian Genocide. It also singles out Turkification cases, forms, and mechanisms to compare them with the mechanisms of Islamization in the Ottoman period to reveal not only the similarities but, first of all, the differences, particularly, due to the concept substitution.

Summary
The article is divided into two parts. The first part covers the development of indictment documents by patriotic unions or fractions of Aleppo in order to submit them to the Paris Peace Conference in 1919, each of which was a summary of the history of the Armenian massacres of a specific region. The overall list of the covered material and the content of each document are also outlined. It is interesting that the documents dedicate large sections for listing the names of the Turkish perpetrators of each region and the material losses suffered by the Armenians.
The second part of the article includes the indictment document of Sassoun district, which contains general geographical information and important details about the social life of the Armenians of Sassoun, i.e. meetings of principals and elders, Armenian-Kurdish relations, the situation of the Armenians of Sassoun in 1894-1896 and 1914-1916, and a brief list of the perpetrators of the massacres. The second part of the document covers the village lists and censuses of the six sub-districts of Sassoun – Dalvorig, Pusank, Hatni-Maratug, Gusked, Pernashen-Khut and Khiank, where 203 villages are mentioned with the numbers of their Armenian population and other details.

Echoes of the Armenian Genocide in Folk Calendar

Summary
The transmission of the memory of the Armenian Genocide has been reflected not only in a number of types of Armenian folk epic-lyrical folklore, but also in various memoirs, one of which has been the folk calendar. In the latter case, the person directly or through the mediator allegedly presents the atrocities of the perpetrators of the Armenian Genocide.
Calendar reflections on the transmission of the memory of Genocide realities are made through oral inquiries. Dialogical-interrogative structures expressed in these folk sayings come in various thematic manifestations:
a. with a calendar description of birth dates,
b. with the argument of the calendar time of marriage,
c. with survey of the age of an eyewitness during the Genocide, reflecting the deportation/exile,
d. pointing to the self-defense heroic battles,
e. through episodes related to the heroes of the national liberation movement.
The folk calendar is original, eloquent fragments of memory. They are presented through eyewitness-survivors’, their relatives’ or other persons’ accounts, as a unique historical and documentary material certifying the Armenian Genocide.