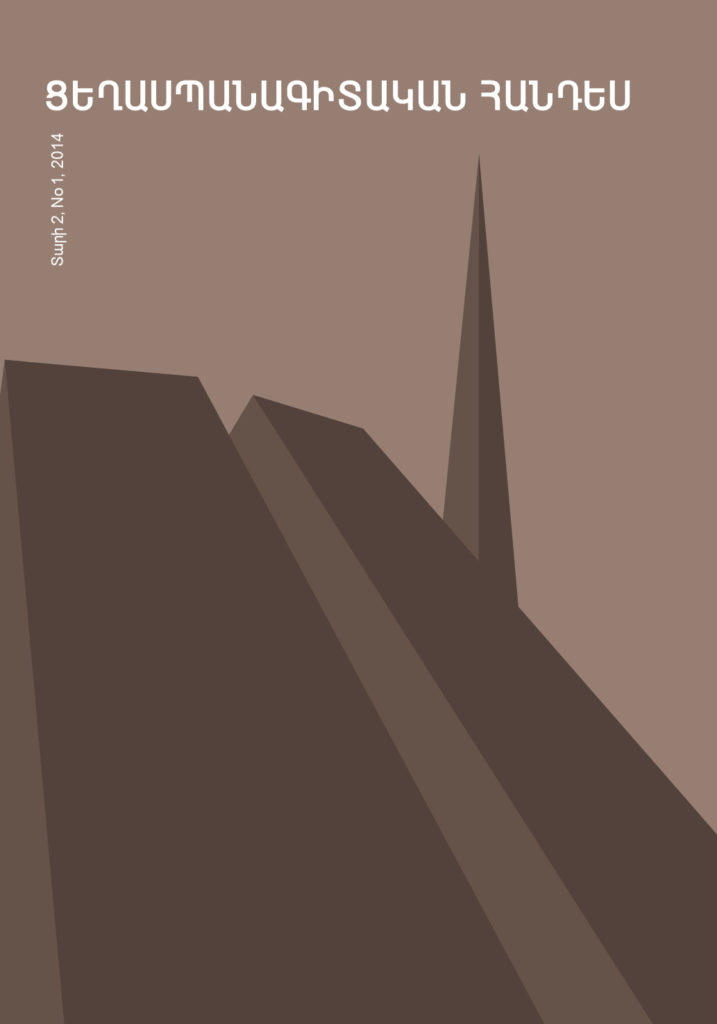 Abstract
The Armenian Genocide and its consequences have become an irreversible component of not only the national tragedy and loss of the Armenian identity and memory, but also of the struggle, national revival, and continuation of life. Thus, the State commission on coordination of the events dedicated to the centenary of the Armenian Genocide intends to carry out an important and historical mission. The mission is meant to properly organize memorial events and provide common approaches to the issues of national unity and cohesion in eliminating the consequences of the Genocide.
Among the stipulated events we should highlight preparations for permanent and temporary exhibitions, organization of international thematic conferences and memorial events, Genocide education, academic research and training of field experts, as well as promotion of new publications, documentaries and movies, creation of websites, and work with the foreign media.
The centenary of the Armenian Genocide is a psychological boundary between the past and the present, but it should not be considered and perceived as the conclusion and the end of our works and activities. On the contrary, the centenary should be considered as an impetus for national cohesion and as a new starting point in the struggle for international recognition of the Genocide and the elimination of its consequences.

Abstract
During 1894-1896 Hamidian massacres, systematic large-scale destruction of Armenian cultural property took place in all provinces of the empire where the massacres were being carried out. The Turks destroyed religious and cultural buildings and massacred the clergy with meticulous brutality.
This article is an attempt to present the methods and consequences of the destruction of Armenian cultural property, especially churches, monasteries, schools and scriptoriums. After plunder and desecration in 1894-1896, Armenian cultural property was mostly destroyed by means of:
• artillery, provided specially for that purpose
• arson
• conversion of monasteries and churches into mosques
• destruction of icons, sculptures and khachkars (cross-stones)
• desecration and trampling of ancient Armenian manuscripts.

Abstract
This article presents and analyzes the main statistical sources on the Armenian population of the Erzurum province of the Ottoman Empire for the period of 1878-1914. The data is grouped by the source origin: Ottoman official, of the Armenian Patriarchate of Constantinople, data from other Armenian, Russian and Western sources. Comparative statistical tables of data provided by the Ottoman, Armenian, Russian and Western sources are compiled.
An attempt was made to estimate the number of the Armenian population of the Erzurum province by districts and sub-districts on the eve of the Armenian genocide. The calculations are based on the Armenian Patriarchate of Constantinople’s 1913-14 census data, which are adjusted with figures found in Genocide survivors’ accounts, refugees’ registration data and other auxiliary sources.

Abstract
In August 1914, Armenian men of draft age were mobilized into the Ottoman army. There were three drafts. The first draft was for men between 20 and 40 years of age, the second from 15 to 20 and the final from 45 to 60. The newly recruited men joined the Armenian officers and soldiers already serving in the army. Then, according to a previously developed plan, the Armenian soldiers were assigned to working battalions, after which came their mass elimination.

From the History of the Armenian Genocide Denial: Critical Review of an Early Turkish publication

Abstract
Several books, falsifying history and denying the role of the Turks in the Armenian Genocide were published long before the birth of Turkish republican historiography.
First and the most important was the book titled “The Actions and Revolutionary Movements of the Armenian Committees” published in Constantinople in 1916. With the help of this publication, the Committee of Union and Progress wanted not only to avoid the responsibility for the Armenian Genocide, but also to blame the Armenians for everything.
In this book, all key elements of the Turkish denial of the Armenian Genocide have been presented in written form for the first time. Later Turkish official republican historiography not only repeated, but developed the main arguments of this book.

War, Genocide, Evacuation. The Evacuation of Armenian Orphans from the Ottoman Empire in 1922 by Jacob Künzler

Abstract
In 1915, news of the large-scale systematic massacres and deportation of Armenians in the Ottoman Empire during WWI sparked a nationwide relief movement in Australia in an attempt to aid thousands of Armenians in need of means to survive.
The relief campaign involved a broad circle of Australia’s political, civic and religious leaders. The Australian government representatives, public figures and celebrities encouraged Australians to support the relief project. Newspapers and magazines printed articles informing the public about the situation in the Middle East and the need for urgent help. As a result of the campaign, a generous contribution was collected, and in 1922 an Armenian orphanage was founded in Beirut.

Abstract
“Deutscher Hilfsbund für christliches Liebeswerk im Orient” had five main stations in the Ottoman Empire on the eve of the WWI: in Mezre, Marash, Van, Mush and Harunie, where about 2000 children had found shelter. The number of children studying in the main stations and substations of the organization, as well as in the educational institutions of the adjacent villages was one and a half times more. Three of the stations, in Mezre, Marash and Harunie, managed to survive the WWI and in 1919 these stations were put under the rule of American missionary leadership. The staff and the children of the station in Van were transferred to Tiflis. Unfortunately, it was impossible to save the children of the station in Mush. Only few teachers were saved and then transferred to the station in Mezre accompanied by two European missionaries.

Rationalization of Cruelty during the Armenian Genocide

Abstract
Any genocide needs great masses of ordinary people who will involve in the process of killing and implement the premeditated plan of extermination, created by the political elite and organized by its local representatives.
The conscription of murderers provided by articulation and stress of old “cultural” stereotypes, development of new ideas to create an image of an enemy through social indoctrination, dehumanization of victims and rationalization of cruelty.
During the Armenian genocide the following methods of cruelty rationalization were used: the people were provided with a sense of taking part in a “historical event”, the usage of the idea of “saving the homeland” as well as the possibility to plunder and possessions of victims.

The Ordinary Executors of the Armenian Genocide: Functional Peculiarities of Perpetrator Children’s Participation

Abstract
In order to understand mass violence, massacres and genocides, as well as to prevent their organization and implementation it is necessary to conduct a research of convictions of different social groups, the concerns they have, their goals and motives for participation in mass violence.
Recent studies show that the human resource implementing mass murder and genocide is in fact, replenished by such marginalized groups as women and children, who were not less as cruel as the adults.
In this article examples of the functional peculiarities of participation of Muslim children in the mass murders and genocide committed against the Armenians in the Ottoman Empire at the end of the 19th and beginning of the 20th century are presented. Children have often appeared to be immediate participants; teens pursued their elders (intergroup conflicts between Armenian and Muslim children), children violated corpses while imitating adults.

Genocide Denial as a Form of Racism: Approaches in International Law

Abstract
Genocide is not a single act but a process. The International Association of Genocide Scholars identified 8 stages of Genocide: denial is the last stage.
Many researchers consider the deliberate denial of a known genocide as a harmful act that should be put on the same footing as indirect and direct contributions to the actual genocide. National and international court decisions clearly demonstrate that genocide denial trivialization or distortion of its facts is a form of racism, which is punishable by law. This article presents the denial of the Armenian Genocide as a form of racism in the context of international law.

Abstract
In this paper, the author shows the attributes of a museum exhibit item and the ways of using it as a unit for restoring the Genocide memory on the example of the Armenian Genocide and Jewish Holocaust museums’ permanent exhibitions. Underlining the importance of the museum exhibit items as an important link in the process of museum communication and recovery of the Genocide memory, the author shows the untimeliness of such items as bones, ashes and hairs in modern memorial museums as well as timeliness of including memorial objects well connected with the documents and photographs, which can attract visitors, providing them with information about the Genocide. And finally, the museum exhibition restores the collective memory and not the individual memory of the Genocide survivors.

The Semantic Analyses of Armenian Genocide in the American Political Discourse

Abstract
The study of political discourse is now considered to be one of the main parts of linguistic and political studies. The research leads to the revealing of the political talks’ or statements’ basic essence. Moreover, within the framework of linguistic studies nowadays a new theory under the name of “Event – based semantics’’ is used and this new theory opens essential study ways for this kind of research. The events of Armenian Genocide presented in American political discourse are analyzed and represented in the following article. The linguistic representation of events is realized by combining logical, semantic and syntactic mechanisms which give us a hint to reveal the events’ deep meaning and causal relations presented in discourse.

Abstract
The issues of crypto and heterodox Armenians have always been in the center of attention of Turkish media. Islamized and crypto Armenians have always been presented in Turkish media as a threat against Turkish integrity. According to some media representatives, those Armenians who were subjected to forced Islamization, but still keep Armenian identity, can take revenge from Turkey. But still, some print media representatives have a positive approach towards them; they even present the entire tragedy of their history.

Abstract
This article refers to the issue of 12 advertisement postcards devoted to the Armenian massacres of 1895-1896 by the French Company “Chocolaterie d’Aiguebelle” in 1896. It was titled “Massacres d’Arménie”. The postcards, presented in the article, depict the Armenian massacres in Trabzond (1895), Malatia (1895), Arabkir (1895), Kyurin (1895), the Galatha district in Constantinople (1896) and the murder of the Franciscan priest father Salvatore. Such an approach helped to draw the attention of Europe to the massacres of Armenians.