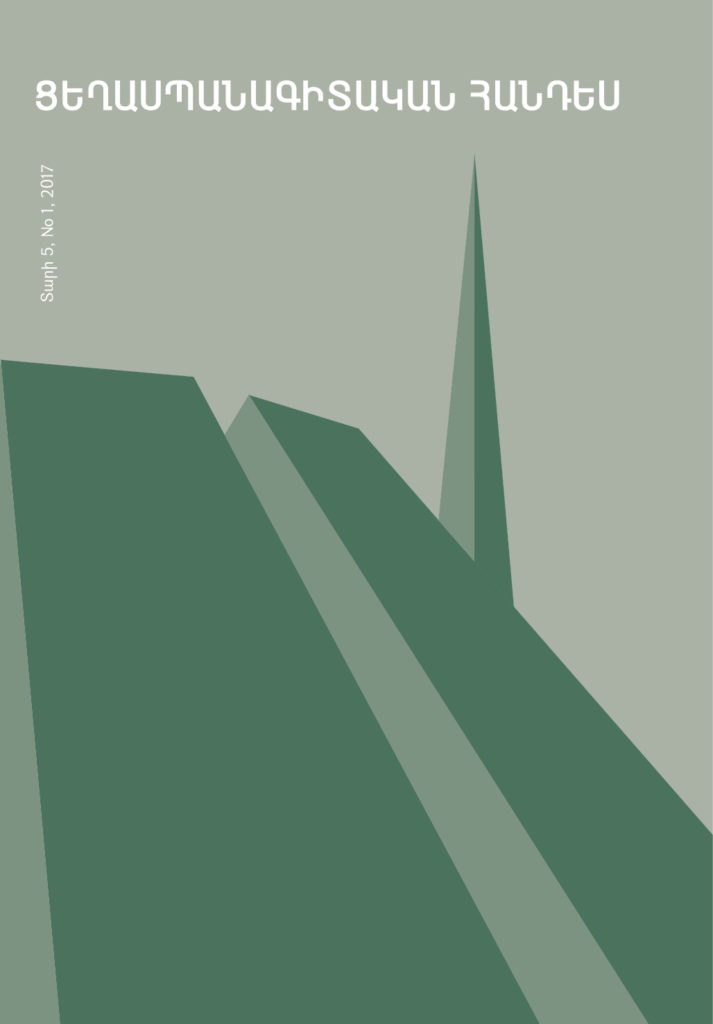 Hamidian Massacres in the Eyewitnesses Testimonies

Abstract
In this article dozens of printed Hamidian Massacres’ eye-witnesses testimonies of 1890s are investigated. An attempt is made to thoroughly analyze them, in order to understand and evaluate their value as a source. The testimonies are classified on the basis of importance or the reliability of the source. Some of them have a special value of the source for studying of the events of this period. These testimonies enrich our understanding of the subject with additional information, which is absent, for example, in diplomatic documents and other sources. On the other hand, they open up new prospects for research on massacres in other scientific studies.

“A Couple of Figures.” The Study of A-Do “Van, Bitlis and Erzeroum vilayets” (1912) and Western Armenian Population Number Debate in the Armenian Press during the Period of Armenian Reform Package Negotiations

Abstract
The article presents the debate in the Armenian press on the issue of the number of Western Armenian population that emerged in connection with the publication of a book “Van, Bitlis and Erzurum Vilayets: An Attempt of Study of Geographical, Statistical, Legal and Economic Situation of those areas,” by A-Do (Hovhannes Ter-Martirosyan), the prominent Armenian historian and demographer, in 1912. This publication chronologically coincided with the re-opening of the Armenian question on the eve of the First World War (1912-1914).
Avetis Aharonyan, Gevorg Altunyan, Nikol Aghbalyan, Arshak Jamalyan and other prominent public and political figures and intellectuals of the time, has written reviews on A-Do’s study.
A-Do’s critics succeeded in highlighting some of the vulnerabilities of A-Do’s work. They also raised strong argument that the A-Do’s figures on the Armenian population of Van, Bitlis and Erzeroum provinces of Western Armenia were incomplete and far below the real picture. Thus the critics have used a method to compare A-Do’s figures with the most up-to-date and accurate statistical data in order to verify the accuracy of A-Do’s statistics. Thus a large number of new statistical data has been revealed to argue against A-Do’s figures, and this statistics has the value of a first-hand source.

Abstract
The nightmare of violence, murders and insecurity continued and got new manifestations after Ittilafitsts left power to Ittihadists on 10 January, 1913. The reopening of the Armenian question had its direct reflection on the interethnic relations in Van province. In the difficult political conditions, the Dashnaktsutyun political party leaders made an effort to cooperate with the Kurds and create a united front for the liberation of the two peoples. Some Kurdish chieftains expressed desire to negotiate with Dashnaktsutyun party.
The Young Turks did not rule out that the implementation of the Armenian reforms could pave the way for a lasting Armenian-Kurdish alliance. Therefore, they continued the policy of inciting the Kurds to carry out persecutions against Armenians.

Abstract
The invasion of Turkish troops and military operations in the north of Iran in 1914-16 were accompanied by the mass extermination of the Christian (Armenian and Assyrian) population, who, for their salvation, turned to the command of the Russian army with the proposal of creating and arming volunteer brigades. Numerous eyewitness accounts show a picture of Turkish atrocities. The advance of Russian troops on the Persian front in 1916 helped prevent the complete elimination of the Armenians of Atrpatakan.

Abstract
The paper analyzes the integration of Armenian refugees into Syria’s social life till 1924. The process of gradual solution of social problems faced by refugees, the mutual Armenian-Arab adaptation, the obstacles on the path towards integration, the steps implemented by French mandate Authorities and Atab people are being analyzed. The improvements in refugees’ social life as well as factors fostering those developments are being presented. The paper analyzes the political situation in the country which partlially substantiated the resentment of Arab side. In the perplexed context of above mentioned factors Armenian refugees were able to re-shape the local Armenian community, improve their social-economic situation and gradually perceive themselves as full-fledged citizens of Syria.

The Religious Issue in the Armenian Genocide Studies

Abstract
The article presents the studies of religious issues of the Armenian Genocide. The religious factor and religion used as a tool for state politics during the Armenian Genocide still requires scholarly analysis, especially to be carried out by the historian-scholars of Religious Studies. The article examines the must for study of the mentioned aspects of the Armenian Genocide, as well as presents the reflections and general approaches of a number of scholars (Raphael Lemkin, Leo Kuper, Vahagn Dadrian, Leonard Glick, Richard L. Rubenstein, Steven L. Jacobs, Ronald G. Suny, Taner Akcam, James J. Reid and Ben Kiernan).

One Step towards Turkish Identity Building: the Formation of “Us” and “Them” Concepts in 1911-1913

Abstract
A member of the formed ethnicity or nationality distinguishes “us” and “them”. The formation of the conceptions “us” and “them” was of primary importance in the Turkish national identity building program. The Libyan and Balkan Wars of 1911-1913 created a favorable environment for the Turkish nationalist elite to form these shapes, to draw the borders of the Turkish nationalism, and to propagate it. This topic is important for discussion, as on the base of all the genocides are individuals, acting against “them”, who perceive themselves as a group. The differentiation between “us” and “them” is a prerequisite not only for the national identity formation, but also for the implemetation of genocide, as the image of the enemy is clarified in this process and the subsequent destruction of it becomes easier.

Unpublished Documents about the Massacre of Antioch (Antakya) Armenians in 1909

Abstract
Eleven previously unpublished documents concerning the massacre of Armenians of Antioch district in 1909 are presented in this article. They are written mostly by the priests sent to the city after the disaster and describe the slaughter and destruction that took place there, address the situation in the city after the massacres, speak of the extreme misery, condition of orphans and widows, orphanages, collection of orphans by foreign institutions, allocation of aid, ceasing of state assistance for survivors, the biased and uncertain processes by the military courts, the release of the criminals and other related issues. A separate list of the massacred Armenians of Antioch, with the names of the crime places and of the murderers is also given.
These documents put into scientific circulation for the first time cast a new light on the events and not only enrich our knowledge of the history of the Armenians of Antioch, but also contribute to the obtaining of more complete picture of the Cilician massacres.
The documents are accompanied with general introduction and notes.

Armenians of Marsovan during the Genocide (1915-23)

Abstract
This article presents the story of deportation and massacres of the Armenians of the town of Marsovan in Sebastia province during the First World War and the following years. Attempt is made to show the genocidal policy of Young Turks and consequent Kemalist government on the example of one settlement. The fate of Marsovan Armenians clearly shows that the Kemalists continued to use the genocidal methods of the Young Turks in their internal policy. Moreover, the example of Marsovan indicates that Kemalists further developed and perfected the methods applied by the Young Turks.

Episodes from Life and Editorial Activity of Hrant Dink

Abstract
This article presents the life and activity of Hrant Dink, the Armenian famous journalist, public figure, founder and editor-in-chief of the Armenian weekly ‘’Agos’’, the typical sides, characteristics of Dink’s life and activity. Hrant Dink was one of the famous Armenians in Turkey, who had become known as one of the authors to raise the issue of the Armenian Genocide. In the article we also emphasize the important and main events in Dink’s life on the basis of the analysis of the facts.