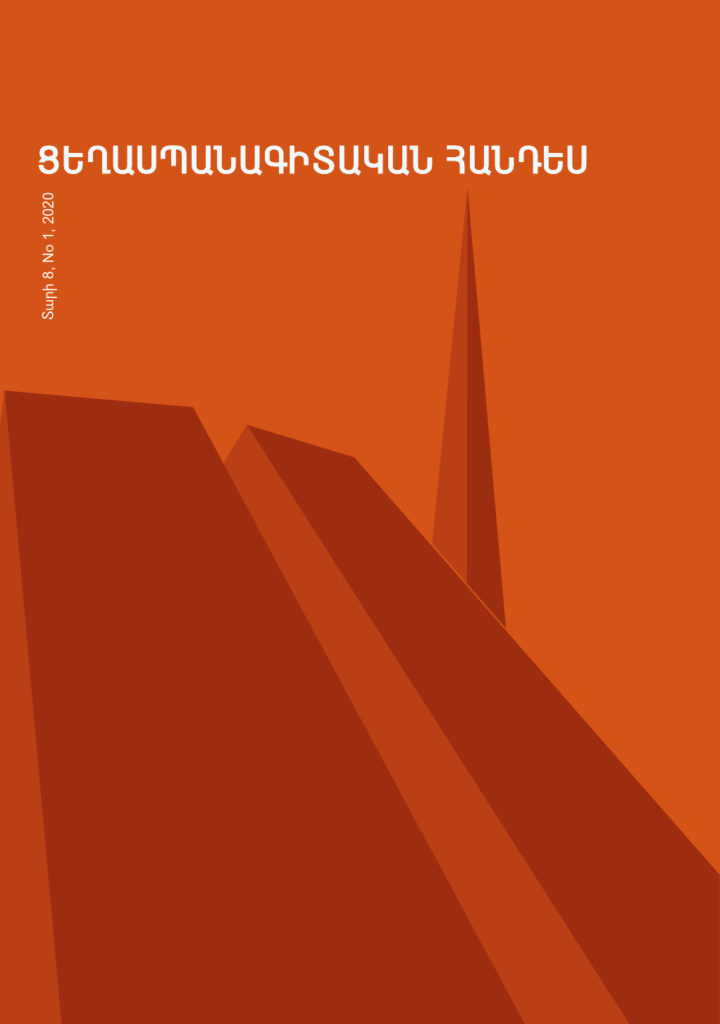 Abstract
The Young Turk leaders of the Ottoman Empire participated in World War I having expansionist objectives and with their former pan-Turkic and pan-Islamic plan to carry out the genocide of the Armenians. The mobilization and the collection of arms of the Armenians started with the war.
The governor of Van Djevdet pasha besieged the town with the Turkish armed forces. The people of Van struggled heroically, till the last drop of their blood, to defend their elementary human right for survival and their Motherland.
The testimonies and historical songs, communicated by 35 eyewitness survivors of the heroic battle of Van, which I have enscribed, audio- and video-recorded, have served as a basis for the preparation of the present article.

Abstract
In the province of Diarbekir, as in other provinces of Western Armenia, the massacres of Armenians in 1895 were organized by the authorities and carried out by ordinary Muslim citizens as well as by the army and police. In this province, as well as in others, tens of thousands of Armenians were killed, as were hundreds of other Christians. It can also be assumed that the massacres were aimed primarily at the Armenian population, while other Christians suffered, as it was sometimes difficult to verify their ethnicity. It was not easy to stop the Kurds during the massacres. It is noteworthy that in some localities where Assyrians, Catholics and Protestants lived in greater numbers, the attackers were mainly Kurds, and the police and troops took part in the defense of the population.
The consequences of the massacres were not limited to the number of people who were killed: thousands of people died after they ended due to illness, stress, and starvation. According to some sources, several tens of thousands of Armenians, especially women, were forcibly Islamized in the province during the massacres.
It is impossible, unfortunately, to calculate the material losses of Armenians in the province, since a thousand houses, shops, churches and monasteries were all looted and many of them were set on fire.
After the massacres, the tendency for Armenians to migrate intensified.

Forcible Child Transfer as a Genocidal Act: from Conceptualization to Criminalization

Abstract
Forcible child transfer is one of the five genocidal acts listed in the Convention on the Prevention and Punishment of the Crime of Genocide. It forbids forcibly transferring children from one group to another with intent to destroy in whole or in part a national, ethnic, racial or religious group. Operating in the nexus of cultural and biological genocides, forcible child transfer has a unique application in comparison with the other genocidal acts as it forms a new identity for a targeted group through the destruction of its former one.
The aim of the Genocide Convention is not only to punish the worst forms of violence against national, ethnic, racial, or religious groups, but also to protect the groups quoted. As rightly mentioned in the explanation set out by the International Law Commission, “forcible child transfer could have particularly serious consequences for the future viability of the group.”
The article studies the conceptual basis of the forcible child transfer clause; the perception of the concept by Raphael Lemkin and why he has proposed it be included in the crime; some conditions of inclusion of the clause in the Genocide Convention and the use of the clause just after the end of World War II by international and national tribunals.

Abstract
This article illustrates the fact that the accelerating pace of technological development in recent years, in particular the use of artificial intelligence (AI) has raised serious concerns among experts that it, along with its advantages, can pose many dangers to mankind when machines think and make decisions for them. Particularly risky is that the development of AI and autonomous weapons can be used to target certain national, religious and racial groups, thereby increasing the risk of genocide and mass killings.
In the present day, when the global arms race using AI is a reality, many technologists are turning their attention to banning lethal autonomous weapons. In addition, in order to prevent the potential negative consequences of AI development, industry professionals have suggested the need to develop an AI code of ethics.
The creation of appropriate legislative mechanisms based on ethics and the protection of human rights has already become an urgent matter for mankind to prevent the possible risks posed by the development of robotics and artificial intelligence technology.
Since artificial intelligence is used to detect and prevent various types of crime, it is therefore necessary to use the opportunities provided by it to prevent genocide and mass murder.

Abstract
The article presents an extensive and unpublished report, written by Mihran Herartian, on the foreign missionaries based in Aleppo in the post-genocide period who were working among the Armenian refugees. It was prepared in 1932 at the Armenian prelacy’s request. The author knew his topic, given that he collaborated with Karen Jeppe. He was well informed of her activities, as well as being the director, accountant and secretary of the League of Nations’ office for the protection of women and children, run by Karen Jeppe herself. He knew the missionaries’ everyday activities in this regard therefore his information may be considered as trustworthy and correct.
Information may be found in the report concerning missionaries like Miss Edith Roberts, Miss Hedwig Büll, Miss Bodil Biørn and Miss Karen Jeppe, as well as others. It is full of interesting evidence about the waste of money and fraud carried out by persons collaborating with the missionaries. Affirmation may also be found in it of how certain people used humanitarian work as a means of convincing the desperate refugees and convert to a new confessional identity, etc.
Herartian’s negative stance and sarcastic style towards some missionaries is obvious. The exception is Karen Jeppe, who is mentioned with great love and respect.
The publication has a short introduction and appropriate annotations.

R. Erdogan’s Myth of “Common History” and the Armenian Genocide

Valery G. TunyanPhD in History, Professor, Leading researcher at the Department of Armenian Cause and Armenian Genocide, Institute of History, National Academy of Sciences of Republic of Armenia.
Research fields – Russian Policy in Armenia, Armenian Cause, and political history of the Armenian Church.
E-mail: tunyanvalery@rambler.ru
Pages 151-163

Abstract
The state policy in modern Turkey is to continue falsifications concerning the Armenian Genocide and the essence of the Armenian question. The newly created historic myths deny the existence of Armenia and the indigenousness of the Armenian people; their goal is to justify the Turkification and Islamization policy, as well as the disappearance of the Armenian people from their historical territories and to legitimize the politics of the extermination of the Armenians. Engaged American historians, writing about the position of the Armenians in the Ottoman Empire and Turkey, significantly contributed to this state of affairs; it allowed President Erdogan to replace the rigid policy of denial of the genocide by using tolerant formulas of common pain and common history, stating that there were an equal number of Armenian and Muslim victims. The use of the old myths about the deportation and the activities of Armenian robbers is preserved. At the same time, the process of the further modernization of Turkey under President Erdogan is acquiring new aspects and facets of Armenian Genocide denial.