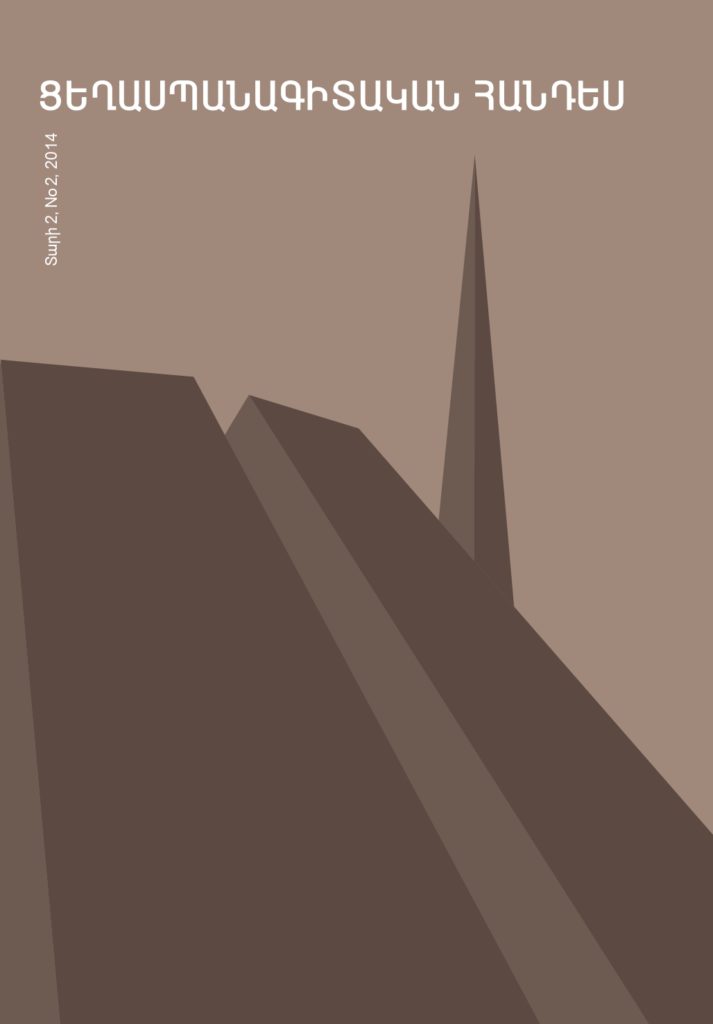 Sport, Scout Movement and the Nationalist Competition in the Ottoman Empire at the Beginning of the XX Century

Abstract
The article presents and analyzes the episodes of the Armenian-Turkish nationalist rivalry in sport and the scout movement in the Ottoman Empire at the beginning of the XX century.
Coming to power in 1908 the Young Turk party “Unity and Progress” launched a consistent policy, based on the ideology of the Turkish chauvinist nationalism, the cornerstone of which became the policy of Turkifi cation and restrictions on the rights of national minorities.
The success of the Armenian sportsmen and the development of the Armenian sport life were in contradiction with the offi cial policy aimed at strengthening the domination of the Turkish element in the Empire. On the eve of World War I the Young Turks completely reorganized the Turkish sport life in the spirit of Ittihatist ideology thus seeking to gain an advantage toward the most advanced sports structures belonging to non-Turkish ethnic groups of the Ottoman Empire.

Abstract
The paper studies the main directions as well as results of the humanitarian works carried out by foreign missionaries in the Ottoman Empire during and after the Hamidian massacres. The relief work of American (ABCFM, American Red Cross), as well as European (KMA, DOM) organizations of taking care of thousands of orphans and widows and recovering the devastated economy of Western Armenia is presented and analyzed.

The Armenian Population of Kharberd Province during the Hamidian Massacres

Abstract
The paper analyzes the main mechanisms of Hamidian massacres on the example of Kharberd province of Western Armenia.
Anti-Armenian policy of Turkish authorities was pursued for centuries. An important part of that policy was attempt to change the demographic situation in favor of Muslim population. Massacres of the Armenians at the end of XIX century also brought demographic changes: nearly 40,000 Armenians were killed during these slaughters, nearly 15,000 were forcefully Islamized in Kharberd province.

Deportation of the Armenians of the Ottoman Turkey: Myths of the Turkish Historiography

Abstract
This paper deals with the Young Turks’ policy to use Islam as a tool in implementing the Armenian Genocide. Turkish politicians were trying to foster their anti-Armenian rhetoric through triggering religious bigotry. Armenians were portrayed as a foe of Islam thus trying to substantiate their arguments for annihilation of the Armenian nation. Jihad was also exploited to further bolster anti-Armenian feelings. Meanwhile Arab religious leaders, among them Sheriff Hussein, were vehemently opposing this line by directly challenging Young Turks’ approach. They were urging Young Turks not to use Islam to achieve their political goals and declaring that main postulates of Islam were in sharp contradiction with Ottoman Empire’s authorities’ Genocidal policy against Armenians.

Kars Province after World War I: History of a Young Turk Project

Abstract
After the Mudros armistice Ottoman Empire had to withdraw its troops from Transcaucasia to the pre-World War I boundaries. However, the Turkish authorities delayed the removal of the soldiers. They established the Muslim Council of Kars and declared so-called South-Western Caucasian Provisional Government. The main goal of this policy was “to preserve” those areas and prevent their transition to the newly established Republic of Armenia. The attempts to create artificial state formations were largely used in the Turkish foreign policy throughout the 20th century.

Abstract
The history and historical memory are crucial for nation building projects. With the memory of the past collectiveness obtains identity. In the case of the Republic of Turkey identity formation was factitious. During this policy fabulous Turkish historiography was developed, the cornerstone of which became a Speech delivered by Mustafa Kemal Pasha (later Atatürk). Thesises underpinned in it, such as indegenouty of Turks in the Western Armenia, the Turkishness of Armenian regions, treachery of Armenians and of all the minorities in the Empire, their collaboration with the West, the version of the Turks’ innocence in the Armenian Genocide has united to form the theory of “the world conspiracy against Turkish people”, which made them accept their Turkish identity, consolidate against foreign danger in a new Turkish Republic, to deny Armenians and anything Armenian.

On the Hierarchy of Perpetrators during the Armenian Genocide

Abstract
The hierarchy of Armenian genocide perpetrators can be divided into three levels. The main decision makers to mass murders։ top-members of government, party elite and several influential persons, who often were at the same time members of authority and leaders of Union and Progress party.
“Desk murderers” at the middle-level, where regional officials (valis, mutasarifs, local police and gendarmerie chiefs, religion leaders) implemented orders of the political leadership. To accomplish Armenian deportations and massacres in the provinces, the CUP reverted to the institute of executive secretaries, who carried out orders coming from the center. The Turkish army and police also participated in the Armenian Genocide. A quasi-military structure, Teşkilât-ı Mahsusa (Special Organization) had a pivotal role in the Armenian Genocide. Manpower to commit the atrocities was replenished with criminals set free from prisons, Circassian gangs and Kurdish tribes.
Direct perpetrators were at the most basic local level of society. A substantial number of ordinary Muslim Ottoman citizens were also involved in mass killings, marauding and plunder of Armenian property, taking advantage of atmosphere of impunity.

On the Issue of the Armenian Genocide Education

The Armenian Genocide in the Context of Religious Studies and Theology

Abstract
The article deals with some interpretations of the phenomenon of genocide in terms of theology and religious studies. The article is an introductive description of the religious studies and theological research of genocides. The issues are classified under two main groups with its points: historical-religious and theological. The first group touches some questions of human massacres in the pagan religions, the stories about the slaughter of indigenous nations of Canaan reflected in the Old Testament, some issues on religious conversions and clashes of the religions that might lead to genocides (the principal pattern is Islam and Christianity). The second group includes some aspects of theology of sacrifices, problem of evil and theodicy, a discussion of canonization of the victims of the Armenian Genocide and some questions of the Armenian national identity after the Genocide.

The Armenian Genocide Denial as a Form of Racism towards the Armenians: the Issue of the Turkish Responsibility under Public International Law

Abstract
The current article deals with an issue of the Armenian Genocide denial by the Republic of Turkey. It reveals the opinions of the renowned genocide scholars, as well as court decisions qualifying Genocide denial to racism and racial discrimination. The main point of the article is that the denial of the Armenian Genocide amounts to discrimination and racism towards the Armenians all over the world. The article also demonstrates that Genocide denial is a punishable act under the national and international legislation and discusses the international legal responsibility of Turkey under the European Convention of Human Rights and International Covenant on Civil and political Rights.

The Cultural Genocide in the Context of International Law: Theoretical Considerations

Abstract
This article discusses the following issues:
1. The pivotal role of the term “cultural genocide” or the presence of cultural element in the concept of “genocide”, defined by Raphael Lemkin.
2. The issue of expanding the definition of the term Genocide in international legal documents and including the cultural aspect in it.
Particularly, the main focus is on 2 documents – the UN Convention of December 9, 1948 titled “The Convention on the Prevention and Punishment of the Crime of Genocide”, and the “Declaration on the Rights of Indigenous Peoples”, issued on September 13, 2007. Although in the drafts of these documents the term “cultural genocide” was included and any action of cultural genocide was condemned, in the final versions of them the term of “cultural genocide” was omitted.