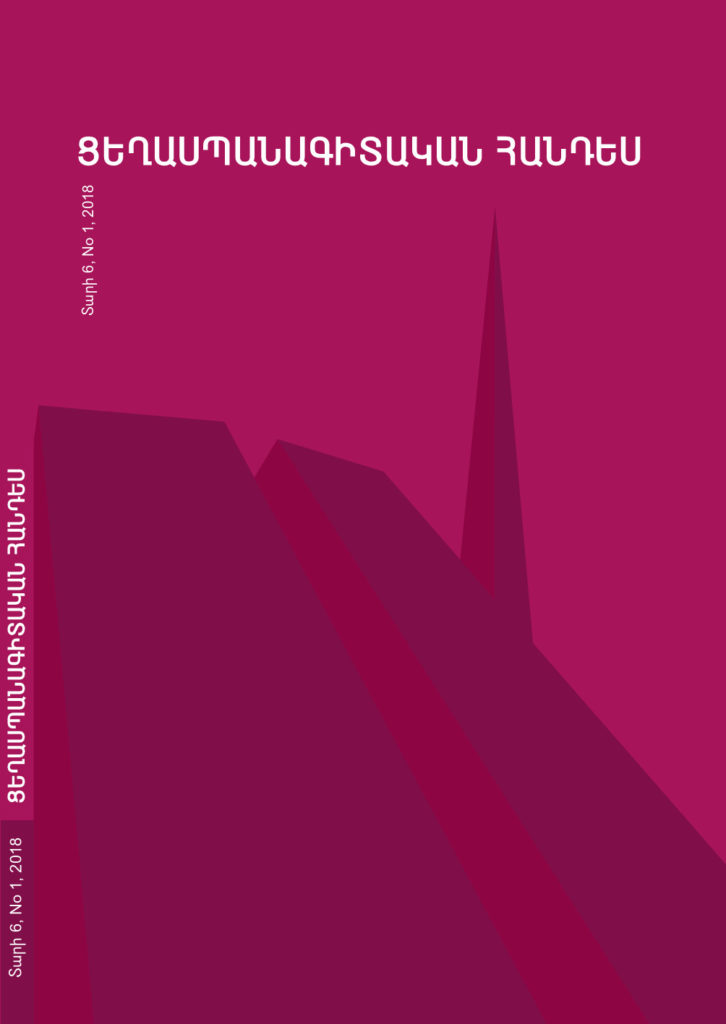 Jihad and the Armenian Genocide: Proclamations, Instructions and Calls

Abstract
In the hands of the Young Turks religion became a tool to rise up Ottoman Muslim class for war. They urged them to take part in the Jihad – the holy war – a sacred duty against the infidel –giaours, i. e. the Christians of the Ottoman Empire. To this end, some levers of religious propaganda such as proclamations, calls, leaflets and pamphlets were issued stressing on urgency to protect Islam from “infidels”, designed and published by the Ottoman secular and spiritual elite. Specific religious terminology and subtext was implemented, as a result thereof the massacres of Christians, primarily Armenians, were widely attended by almost all strata of religious and social classes–Muslim clergy, the military, the wealthy and ordinary citizens.

Kötü Han. A Station on the Deportation Route of Sebastia

Abstract
The article presents the massacres and robberies which took place in the summer of 1915 in Kötü Han; one of the stations on deportation route of Sebastia province. The study is based on the compilation of testimonies of eyewitness survivors from the Armenian archives, print media, memoir books, collections of testimonies, the documents emerging from the turkish courts-martial of 1919–1920, as well as on the studies on the topic. The material discussed in the article shows that the violence, massacre and robbery committed by the “Insurance Commission” were planned, systematic and coordinated by the authorities. Particular attention is paid to the relationships between the foreign witnesses, victim and perpetrator groups and their interactions.

Abstract
The article presents unpublished testimonies of famous writer, editor, historian, and cultural figure Aram Andonian (Constantinople, 1879 – Paris, 1951) on the atrocities committed by Saleh Zeki Bey in Everek, a city near Caesarea. Zeki Bey was appointed the provincial governor of Der Zor after Everek and became the chief executioner of thousands of Armenians, who were deported to the Syrian deserts.
In the first chapter the author of the testimony describes how Zeki Bey was appointed as a governor of an important place like Der Zor, which was a station for thousands of Armenians who were deported here from different parts of the empire. This was done in contsrast to the atrocities committed by him in Everek and contrary to the complaints of the Armenian Patriarchate of Constantinople against his appointment. This appointment was rather well-thought and preplanned, because like this the two governors of Aleppo who had refused to participate in the massacres of Armenians had been officially dismissed and were replaced by Mustafa Abdull Halik Bey (Renda), the executioner of Armenians of Baghesh. Prior to the massacres, Zeki too, had appointed people, who were his supporters and cooperated perfectly with him in the Armenian massacres in the important positions.
Relevant notes are also attached to the published document.

Abstract
The 24th of April is not merely a Memorial Day of the Armenian Genocide victims. It is one of the most important and unique elements of the Armenian identity that unifies all Armenians through invisible links. The Memorial Day has been shaped in the course of many political twists and turns and even a century later the shades of its meaning are still discussed in wide social and professional circles. Observation of the Memorial Day, remembrance of the victims, reminiscences of the Genocide during one day’s event embodies and reflects the current state of the society, i.e. it is the summary of the reality, concepts, policy and propaganda actual at the given moment.
The first forms of observation of the memory of the Genocide victims after WW1 both in the Armenian communities existing for centuries and in the newly established ones in Diaspora were the ceremonies of mourning the memory of the Genocide victims. They were organized first of all for remembering the Genocide victims in the form of mourning.
However during such ceremonies people bemoaned their dearest not in private but collectively mourned the loss of hundreds of thousands. Psychologically collective mourning ceremonies to some extent relieved the feeling of loss. Alongside, they emphasized the necessity of supporting the orphans, widows and generally those in need as a direct consequence of the Genocide by means of creative work, and not weeping. Thus, the mourning ceremony played the role of a specific factor of ethnic consolidation that demonstrated the unity of Armenians even if it was just mourning. Unity was demonstrated also through the shutdown of Armenian schools, institutions and shops on Memory Day.
There were certain commonalities in the structure of the mourning ceremonies: the main actors were the clergy (service for the dead at the church, sometimes a procession to the cemetery, classic and Armenian spiritual music and chants). As a rule, the representatives of other Christian Churches were also invited thus stressing the Christian origin of the victims as one of the reasons of mass slaughter.
The next part of these ceremonies consisted of reciting the works of victimized writers, speeches of the representatives of various organizations, parties or intellectuals, which inspired the audience with confidence and trust in the future of the Armenians. As a rule all speakers would first explain why it was necessary to remember and, particularly, the necessity of collective remembrance of the victims. The audience was indoctrinated by the ideology to establish the connection between the victims and the fact of the existence of the newly established Republic of Armenia at the cost of their lives. In parallel with defaming the perpetrators of the Genocide, the strengthening of the Republic of Armenia was pointed as a revenge and the Armenian victory should manifest in its will to revive, in survival itself. The fact that Armenians were fighters was sometimes demonstrated through emphasized participation of the Armenian servicemen and heroes of self-defense in the mourning processions.
As a rule the representatives of foreign Churches, high rank foreign servicemen and members of the diplomatic missions were invited to the mourning ceremonies. It was a modest attempt to make the narrow, merely community event of the Genocide victims remembrance publicly known and make the citizens of the countries of their residence acknowledge that reality.

Abstract
Sexual violence has always been an integral part of armed conflicts throughout the history. However, despite its widespread usage only recently sexual violence has gained necessary attention in international law and was recognized as a tool of war and not a necessary byproduct of armed conflicts.
The establishment of international criminal tribunals in 1990s and the International Criminal Court greatly contributed to the criminalization of sexual violence during crimes against humanity, war crimes and genocides. While discussing the development of international law on sexual violence, this article concentrated on the concept of forced marriages as a crime against humanity that emerged after the conflict in Sierra Leone, although its origins can be traced back to 1915 Armenian Genocide.